An artificial neural network is a computational system loosely based upon biological neural networks. The neural network takes a set of inputs, processes the inputs according to the architecture and transfer functions of the neurons, and then combines the individual neuron outputs to yield a composite set of outputs. The figure below shows a generic neural network as it acts upon the inputs to produce outputs.

The overall output of the neural network in response to specific inputs is determined by the network architecture and the neuron transfer functions. Both of these network characteristics can be "trained" to recognize certain input/output patterns if a training set of data is available. The "trained" neural network then represents the system input/output mapping and can be used on out-of-training input data to estimate outputs.

The advantages of using neural networks are that they can produce nonlinear input/output mapping, they can still function when one or several of the internal neurons fail, the neuron architectures and transfer functions are computationally relatively simple, and the network learns input/output patterns and does not need to be determined or set a priori.

The disadvantages of neural networks are that they need to be trained via supervised learning prior to use and that they may be computationally expensive.

The detection of damage in structures is a topic that has considerable interest in many fields. Detecting damage in space structures subjected to the harsh environment of space could allow the repair of the structure to occur before the damage threatens the mission objectives. Offshore oil platforms constantly have problems with potential structural failure in the corrosive sea environment. Buildings and bridges, where structural failures proves catastrophic, would benefit from a reliable method of detecting and pinpointing structural damage.

A methodology was developed in which active member transfer function data is used in conjunction with an artificial neural network to detect damage in structures. The method relies on training a neural network using active member transfer function pole/zero information to classify damaged structure measurements and to estimate the degree of damage in a structure.

The methodology was demonstrated on the 25 bar transmission tower as shown below. A baseline set of transfer functions between actuators and sensors were obtained. Each design variable was then perturbed and the resulting structural poles and zeros recorded for use in training the neural network. A neural network with a set of inputs, two layers of hidden neurons, and a single layer of put neurons was batch trained with the baseline and perturbed data. The hidden layers of the neural network contained 5 and 7 neurons, respectively. 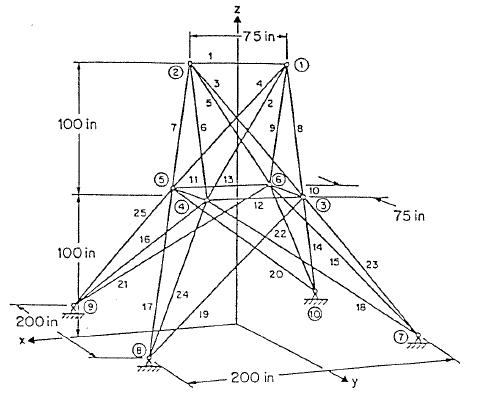 Three cases of simulated damage were run on the actual truss and compared with the predictions made by the trained neural network. The most interesting case corresponds to the presence of damage that was outside the domain of the training data. The figure below shows how the neural network predictions compared with the actual damage. The network predicts within a few percent the damage present in each structural member. 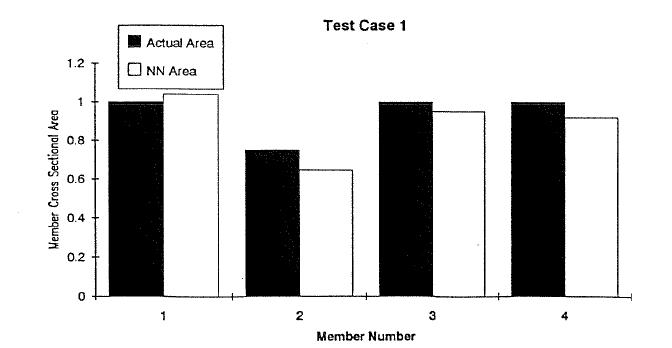 Contributions to Body of Knowledge

The results of the health monitoring and structural damage detection effort using neural networks contributed to the domain of use for neural networks. These contributions have been documented in:
Manning, R. A., "Structural Damage Detection Using Active Members and Neural Networks" , AIAA Journal, Vol. 32, No. 6, June 1994, pp. 1331-1333
Manning, R. A., "Structural Health Monitoring Using Active Members and Neural Networks", US Patent No. 5,774,376, granted June 30, 1998