The figure below shows the steps involved in a genetic algorithm After the problem is cast in terms of fitness functions and design variables, an initial population of candidate solutions is chosen at random. For each subsequent generation, the chromosomes are decoded, a cost or fitness function is evaluated, mates are selected, and reproduction occurs. The operators that govern the reproduction are pure reproduction, crossover, and mutation. 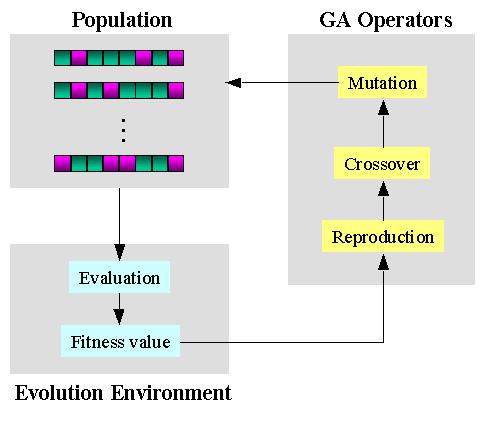 Ray has used genetic algorithms and evolutionary algorithms to solve a number of difficult optimization problems in his work. Minimization of the weight of a structure, enhanced damping of a space structure, and the test tuning of a finite element model to test data are examples of the application of genetic programming to engineering design and analysis problems. These examples show the practicality and usefullness of genetic algorithms to solve real engineering problems.

Contributions to Body of Knowledge

Ray has used genetic programs and evolutionary programming to solve some difficult engineering and social problems. His workis currently unpublished due to contractual restrictions.